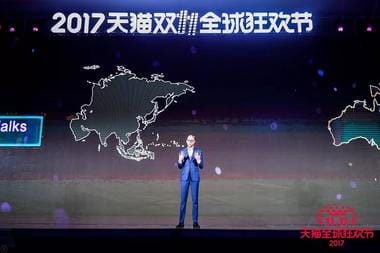 The Dutch company Eurail.com was part of yesterday’s live show organized by Alibaba to close off Double 11 (Singles Day). In the final ten minutes of the event, right before announcing the bargain festival’s total revenue, five international partners did a presentation on their cooperation with the Chinese web store giant. Eurail.com sells Eurail train passes in China through Alibaba.

On stage with Alibaba

Thom Valks, Customer Service Coordinator for Eurail.com in Utrecht, spoke in Chinese on stage about the cooperation with Fliggy, Alibaba’s travel platform. In 2015, the Dutch e-commerce company was the first European travel company to launch a flagship store on Fliggy. Eurail.com also uses popular Chinese social media channels, such as Aliwangwang (an Alibaba messenger service), Weibo (the Chinese version of Twitter), and Youku (the Chinese version of Youtube) for customer contact and marketing activities.

“Last night was one of the most amazing experiences of my life,” says Valks. “My presentation was viewed by approximately 50 million people worldwide on Youku. I know that on Monday at the office my audience will be a lot smaller again, but I’ll be just as happy to hand out travel advice again to our customers in the Netherlands, China or anywhere else in the world.’

“We’ve been active on the Chinese market for five years now. Participating in the Double 11 spectacle is an important milestone in our cooperation with Fliggy. Ten thousands of Chinese tourists have already discovered Europe thanks to our webshop. This number keeps on growing, especially since more and more Chinese tourists decide to travel by themselves instead of with a group,” says Brenda van Leeuwen, CEO of Eurail.com.

Eurail.com is one of the biggest online travel companies in Europe, with a total revenue of 88 million euros in 2016. The company has around a 100 employees of over 20 different nationalities.

You cannot change the currency once you have items in your cart!